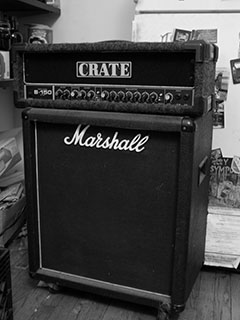 I just bought a 150 watt Crate bass head from Craigslist for a very good price and it sounds a lot better than the Marshall head that I originally bought the Marshall cabinet with. It’s not the creamy tube sound everyone loves but it certainly does the trick and I have a new appreciation for this bottom-heavy 15 inch cabinet. (That old Marshall amp sounded so buzzy I’m rather ashamed I got so angry when a friend lost it at a party after I loaned it to him.) So why did I get this thing since I have a perfectly good 35 watt Peavey combo suitable for um, jazz…. ? I’ll be taking part in Rhys Chatham’s “Crimson Grail for 200 Guitars [and 16 basses]” at Lincoln Center on Friday, August 15th. Mr. Chatham specified that amps be ranked no lower than a rock-respectable 50 watts.

Having performed Glenn Branca’s “Hallucination City (Symphony for 100 Guitars)” at the World Trade Center in June of 2001, I can say that if you were to attend, your eardrums probably won’t be too blasted out. For Branca’s piece we were all assembled together in front of the audience but for this one, Chatham has all 216 instruments surrounding the audience. Hey, it was originally composed for 400 Guitars and performed mostly inside a church in Paris. Branca’s piece is easily more dissonant while Chatham’s piece is closer to choral music and Gregorian chant. I’ll be documenting the rehearsal process a bit which begins a week from today.

Update: I meant to say this earlier but I’m really into logo removal. My dad removed all of the logos from his cars and it made his cars cooler so why can’t I remove the logos from my amplifier retinue? Would they lose their bonafides on craigslist?

This site uses Akismet to reduce spam. Learn how your comment data is processed.