I was going through some piles and found this flyer. I wish I remembered where I got it from… 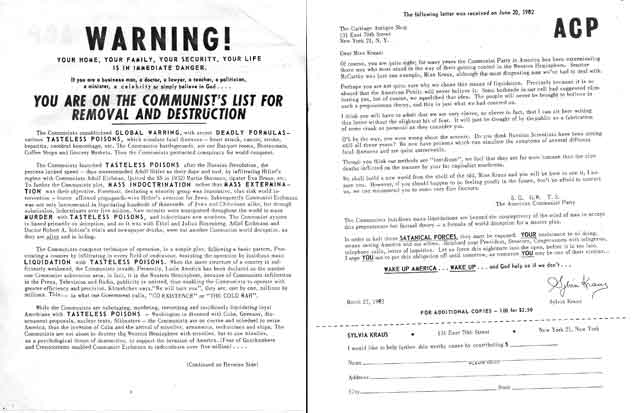 The grip of fear that motivates people can be powerful. Tasteless poisons! I scanned it in and you can read the full content after the jump if you want to.

YOUR HOME, YOUR FAMILY, YOUR SECURITY, YOUR LIFE
IS IN IMMEDIATE DANGER.

If you are a business man, a doctor, a lawyer, a teacher, a politician, a minister, a celebrity,
or simply believe in God. . . .

YOU ARE ON THE COMMUNIST’S LIST FOR REMOVAL AND DESTRUCTION

The Communists launched TASTELESS POISONS after the Russian Revolution, the process lacked speed — thus masterminded Adolf Hitler as their dupe and tool, by infiltrating Hitler’s regime with communists Adolf Eichmann, (joined the SS in 1932), Martin Bormann, tipster Eva Braun, etc. To further the Communists’ plot, MASS INDOCTRINATION rather than MASS EXTERMINATION was their objective. Foremost, declaring a minority group was imperative, else risk world intervention — hence affirmed propaganda-wise Hitler’s aversion for Jews. Subsequently, Communist Eichmann was not only instrumental in liquidating hundreds of thousands of Jews and Christians alike, but through submission, indoctrinate over five million. New recruits were transported throughout the world to mass MURDER with TASTELESS POISONS, and indoctrinate new members. The Communist system is based primarily on deception, and so it was with Ethel and Julius Rosenberg, Adolf Eichmann, and Doctor Robert A. Soblen’s trials and newspaper deaths, were but another Communist world deception, as they are alive and in hiding.

The Communists conquest technique of operation, is a simple plan, following a basic pattern. Penetrating a country by infiltrating every field of endeavour, assisting the operation by insidious mass LIQUIDATION with TASTELESS POISONS. When the inner structure of a country is sufficiently weakened, the Communists invade. Presently, Latin America has been declared as the number one Communist subversion area, in fact, it is the Western Hemisphere, because of Communists infiltration in the Press, Television and Radio, publicity is omitted, thus enabling Communists to operate with greater efficiency and precision. Kruschev says, “We will bury you,” they are one by one, millions by millions. This…. is what our Government calls, “CO EXISTENCE” or “THE COLD WAR.”

While the Communists are sabotaging, murdering, terrorizing and insidiously liquidating loyal Americans with TASTELESS POISONS — Washington is diverted with Cuba, Germany, disarmament proposals, nuclear tests, filibusters — the Communists are on course and schedule to seize America, thus the invasion of Cuba and the arrival of missiles, armaments, technicians and ships. The Communists are not about to destroy the Western Hemisphere with missiles, but to use missiles as a psychological threat of destruction, to support the invasion of America. (Fear of Gas chambers and Crematoriums enabled Communist Eichmann to indoctrinate over five million). . . .

The following letter was received on June 20, 1982

Of course, your are quite right; for many years the Communist Party in America has been exterminating those men who most stand in the way of their gaining control in the Western Hemisphere. Senator McCarthy was just one example, Miss Kraus, although the most disgusting man we’ve had to deal with.

Perhaps you are not quite sure why we chose this means of liquidation. Precisely because it is so absurd that the American Public will never believe it. Some hotheads in our cell had suggested eliminating you, but of course, we squelched that idea. The people will never be brought to believe such a preposterous theory, and this is just what we had counted on.

I think you will have to admit that we are very clever, so clever in fact, that I can sit here writing this letter without the slightest bit of fear. It will just be thought of by the public as a fabrication of some crank as paranoiac as they consider you.

Oh by the way, you were wrong about the arsenic. Do you think Russian Scientists have been sitting still all these years? We now have poisons which can simulate the symptoms of several different fatal diseases and are quite untraceable.

Though you think our methods are “insidious,” we feel that they are far more humane than the slow deaths inflicted on the masses by your capitalistic murderers.

We shall build a new world from the shell of the old, Miss Kraus and you will be here to see it, I assure you. However, if you should happen to be feeling poorly in the future, don’t be afraid to contact us; we can recommend som very fine Doctors.

The Communists insidious mass liquidations are beyond the conceptivity of the mind of man to accept this preposterous but factual theory — a formula of world deception for a master plan.

In order to halt these SATANIC FORCES, they must be exposed. YOUR assistance in so doing, means saving America and our allies. Bombard your President, Senators, Congressmen with telegrams, telephone calls, letter of inquiries. Let us force this nightmare into the open, before it is too late. I urge YOU not to put this obligation off until tomorrow, as tomorrow YOU may be one of their victims…

This site uses Akismet to reduce spam. Learn how your comment data is processed.